A variety of air pollutants have known or suspected harmful effects on human health and the environment. In most areas, these pollutants are principally the products of combustion from heating and power generation, and motor vehicles. Pollutants may not only cause problems in the immediate vicinity of these sources, but can travel long distances and affect more people and places.

The health effects associated with the main pollutants of concern are:

The Daily Air Quality Index has been developed to provide advice on expected levels of air pollution. In addition, information on the short-term effects on health that might be expected to occur at the different bands of the index (Low, Moderate, High, Very High) is provided.

In the UK, the equivalent of around 29,000 and 23,500 deaths are attributed to exposure to PM2.5 and nitrogen dioxide, respectively. Its impacts cost society around £20b every year.

In the context of air quality management, the pollutants of primary public health concern are nitrogen dioxide (NO2) and particulate matter (PM10, PM2.5).

Air pollution and health in Wales

Young and healthy people are unlikely to have any long-lasting effects from exposure to moderate air pollution concentrations. However, raised concentrations and/or long-term exposure to air pollution can lead to more serious health impacts that can affect the heart and respiratory system, and could cause cancer. Children, older people and those suffering already with lung or heart problems are most susceptible to the impacts of air pollution.

Research in Wales has also found that those living in more deprived areas may be at greater risk. The study, that linked local-level air pollution, income deprivation and health outcome data, found that annual mean air pollution concentrations were high in both ‘most’ and ‘least’ deprived areas, but highest in the former. This pattern was most pronounced for NO2 air pollution. 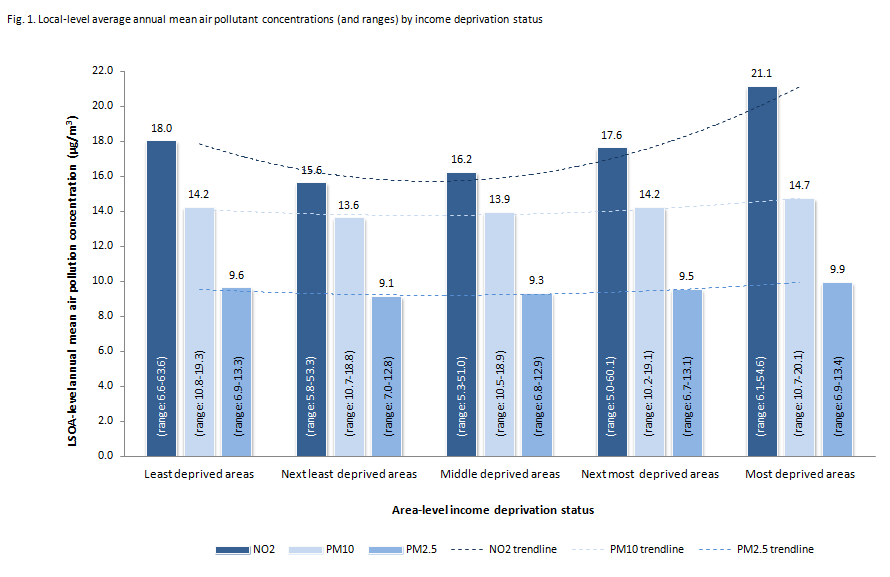 Although weaker than the known, strong associations between deprivation status and health, the same study found that air pollution, deprivation status and health are inextricably linked. Air pollution exposure not only poses direct risks to individual and population health, but indirectly – through its interaction with other wider health determinants – it can create disproportionate and strengthened disease risks and burdens between and within regions (inequalities).

Aside from deprivation links, it is possible that others may be at increased risk too, perhaps because they work in heavily polluted places or commute to work through heavily congested and polluted areas.