Complete the puzzle below and find out what causes air pollution! 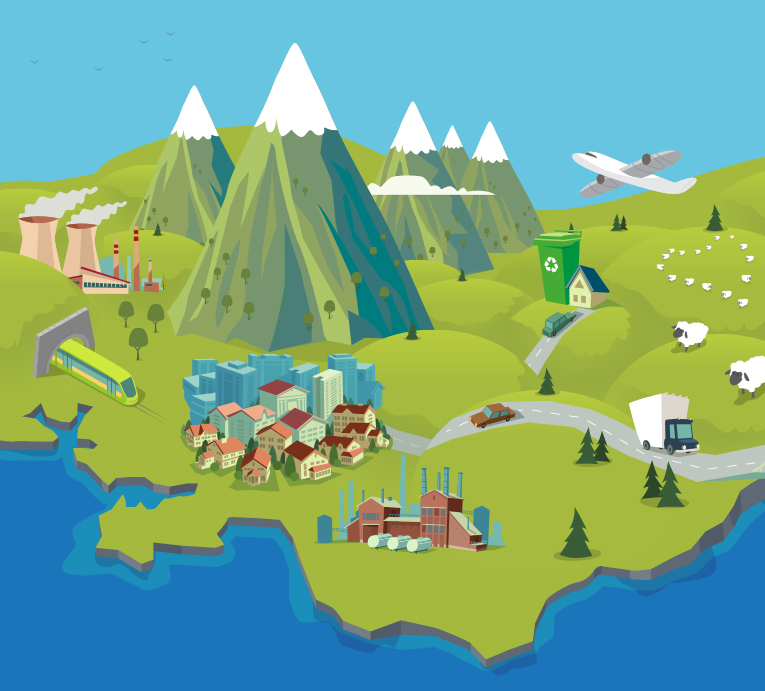 Where does air pollution come from?

It's your job to find different items in this landscape to discover where air pollution comes from! There are 10 different sources to find - good luck!

The weather can have a have an effect on air pollution. Wet, windy days usually mean that air quality is good. This is because rain washes pollutants out of the air, and the wind spreads the pollution so that it’s not in the one place. (This is known as dispersion.)

Air quality can be poor when it is very still. On hot, sunny, summer days, when it's not very windy, a gas called ozone is formed by chemical reactions between other pollutants such as nitrogen dioxide. The reactions are helped by sunlight. In winter, when it's very cold but not very windy, cold air can get trapped under a layer of warmer air above it. When this happens, the layer of warmer air acts like a ceiling. Air pollution is trapped near the ground and can’t escape to disperse.

The weather can help to make pollution levels lower by blowing the pollutants away. On a very windy day air pollution is often very low.

Road traffic is one of the biggest sources of pollution in Wales and the number of the number of vehicles on our roads is always increasing. Vehicles like cars, motorbikes, vans, buses and lorries run mostly on petrol or diesel. When petrol and diesel are burnt in the engine, pollutants are given out from the exhaust of the vehicles.

The main pollutants that you might find near busy roads are nitrogen oxides, carbon monoxide and particulate matter. These are all emitted close to the ground in the air that we breathe. They may lead to health problems especially when air pollution is high. Bigger vehicles with bigger engines put more pollution into the atmosphere. Road transport is the biggest source of nitrogen oxides in Wales.

In recent years, the number of people making journeys by plane has increased greatly. This is good news for tourism and the transport industry, but it's not good for the environment.

Planes use a large amount of fuel, and that means they produce a lot of carbon dioxide. This is one of the “Greenhouse gases” that is responsible for climate change. Some families are helping reduce CO2 emissions by not flying and having holidays closer to home.

You might think that air pollution is a problem for towns and cities only, but in recent years industry and power stations have been built in rural areas. Often the wind carries pollutants such as oxides of nitrogen and sulphur dioxide into villages and surrounding areas.

In the summer, nitrogen oxides can react with other pollutants in sunlight to make ozone. On very hot and still summer days in the countryside, levels of ozone can build up to harmful levels. This can affect our breathing, especially people with asthma or other breathing difficulties.

Animals like cows and sheep spend lots of time eating grass and digesting it. Methane is a colourless gas that is produced in their stomachs when bacteria break down the food that they eat. The gas is then released when they burp or break wind!

In Wales, livestock are the biggest emitters of methane. Methane is the second most important greenhouse gas (after carbon dioxide), which means it contributes to climate change.

Today many large industries are located on the outskirts of towns, although pollution can be transported into towns and cities by the wind.

Trains are a great way of moving lots of people around the country and they cause a lot less pollution than the same journeys made by car.

But trains do pollute the environment - even electric trains because the electricity that they use is generated at a power station. When these fuels are burnt, pollutants like nitrogen oxides, sulphur dioxide and particulate matter are let into the atmosphere.

In wales waste disposal is the second biggest emitter of methane, livestock being the largest emitter. The rubbish that we throw away decomposes in the ground and releases methane gas into the atmosphere.

Methane is the second most important greenhouse gas after carbon dioxide, which means that it also contributes towards climate change.

You solved the puzzle.